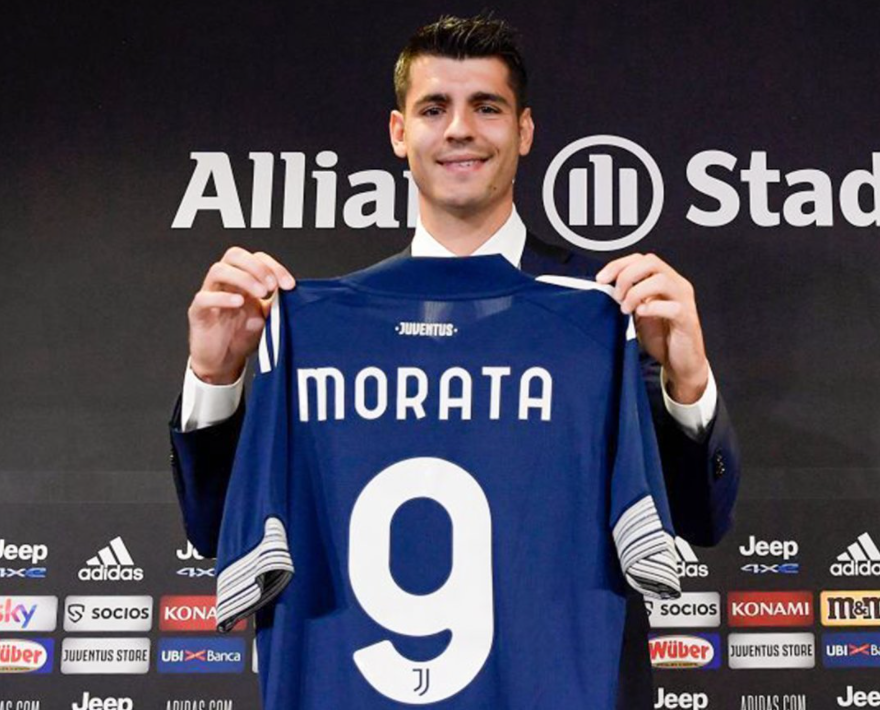 Hupu News, September 25 Juventus officials held a press conference for Morata today. The Spanish striker told the media how he felt after his return in the press hall of the Allianz Arena.

At 14:30 in the afternoon, Italian time, Morata came to the press office of the Allianz Arena and officially accepted the first interview after the return.

Hello everyone, after a journey, I am very happy to be back. I was two when I left, and now five people are back together (three children). I think I have become a better player and a better person from any angle, so I am very happy.

As you know, the transfer market is unpredictable, anyway, I finally came back, this is the most important thing. Maybe I didn't have too many good times in my previous career, but it was different from this moment. Now I am at the right time and the right place. I know what to do and not to do, because I have experienced it once. I am more mature and more experienced than then. This is a new opportunity for me. It is a once-in-a-lifetime opportunity.

It has a very positive impact. I knew he would become a Juventus coach one day, because he was born with this material. Juventus is in need of someone who loves football so much. I am very happy to work with him. The two previous training sessions have been enough to impress me, including the way he manages the team and coaching. Pirlo is the perfect choice for Juventus. He knows exactly how to dispatch players and get them involved, so all this will achieve important results.

Yes, of course I am ready, otherwise I will not come. There are many options for the striker. I have to train hard to get a place. My teammates know me. They know that I will do my best to help the team, to score goals, go back and play, and fulfill all the coach's requirements for me. I have grown a lot more than in the past, I will wait for my opportunity, and then give everything for the team. I came here to win with Juventus and continue the glorious history of Juventus.

I have been asked this question many times, so I want to answer it honestly. Of course I want to score 40 goals as a forward, but I have seen many forwards score 40 goals, but his team got nothing. I scored 15 goals last season, but my team won many games. Whether I am a starter or a substitute. If I only focus on individual scores, I might as well play tennis. Football is a collective event. Of course, I definitely want to score as many goals as possible, and I will work hard for it.

Yes, I will not hide this. I always say that Atletico Madrid is my childhood dream, and I joined Atletico Madrid. But when I came here, Juventus entrusted me with a heavy responsibility to me, who was still very young. The relationship between me and the team is getting deeper and deeper. I do dream of returning here one day. Now it has really come true. I know someone I can say something, but I know what to do. I am very happy. I still want to say: This is the right time and the right place.

No, I think that the absence of criticism means that I am not at this level. I am mature now. When I was 21 years old, I thought a lot about these critics, but now I have to work hard and I have to keep my head clear. The best memory? My mind is full of good memories. I think the best thing is to know my wife and win the championship for Juventus.

Yes, we are very familiar with each other, as a player I also know him very well. My relationship with Ronaldo has always been great. He gave me suggestions and said that he was very happy to meet me again. We also talked about other things, about each other's family, football, and topics about this season.

Unfortunately, I can easily tell what I did wrong and what I could do better. It didn't depend on me when I left Juventus, the contract is like that and we must respect it. I had a good start at Chelsea, but it was not so smooth after the injury. Then I returned to Spain because I wanted to realize my childhood dream and I had to do that. Maybe a lot of things will be different when I stay at Chelsea, because I also scored a lot of goals, but I do want to go back to Spain because I know I can’t adapt to the London lifestyle.

I had a great time at Atletico Madrid. I don’t know how people would say about it. They only saw the news in the newspapers, and I’m going to keep it all in my heart. Now I’m back at Juventus and Atletico has my own. Players. I’ve always been comfortable at Juventus. After I left, I kept in touch with many people. I also talked to the coach and Fabio (Palatic), even if it’s not about transfers. Simply maintaining a good relationship, now we will also work together to usher in new challenges.

Just like in previous years, Juventus has always been one of the most powerful teams in the world. This has formed an inertial thinking. Everyone will think that. These years Juventus have been very close to the Champions League trophy. I hope that Do it, if I can really hold the cup, then I will definitely become the happiest person in the world. Juve’s goal is the Champions League. This is the wish of each of us and we must work hard for it, because every year there are many new possibilities.

I am a football fan and I will watch a lot of games. I think Serie A is already becoming the best league. There are many top players here and the level of the team is very high. I think that after you have won the championship for many years, the pressure will be greater every year. People don’t understand the value. They have become accustomed to Juventus winning the championship. In fact, every year is more challenging than ever because of other teams. Will want to beat Juventus more, so the difficulty of winning the championship has been increasing.